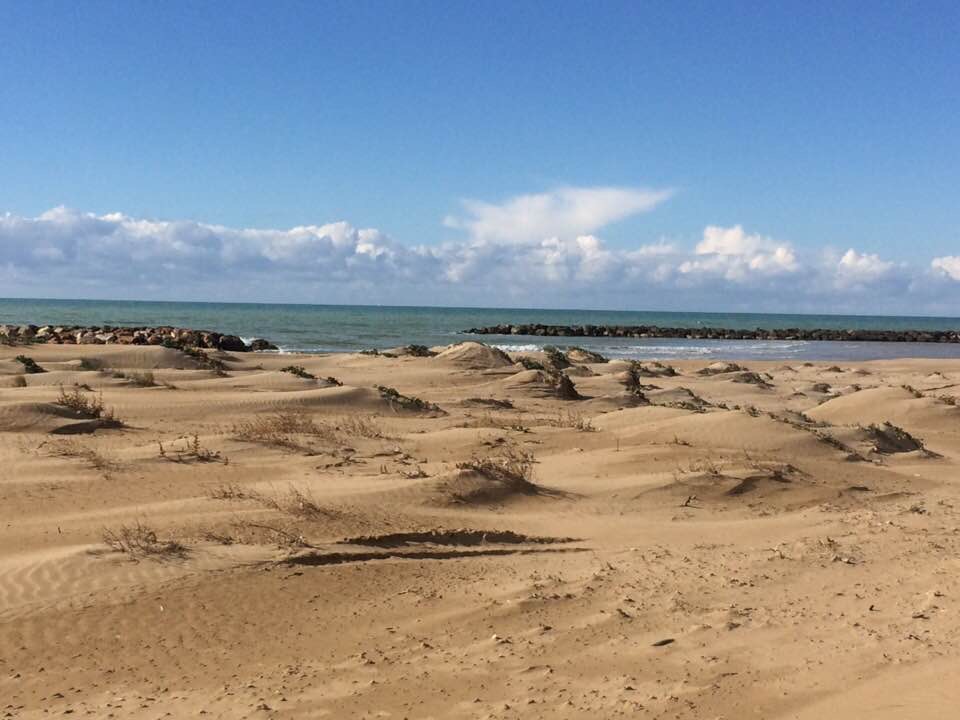 One of the best beautiful things of Scicli it is its coastline of about twenty kilometers, eighteen of which formed by large beaches of fine golden sand, for the most part free and without bathing establishments and for this reason for innate beauty. The sea is crystal clear everywhere, with prevalent shallow water, ideal for children.

Scicli has five seaside villages and several districts that overlook the sea. Starting from the west, the first one you meet is Playa Grande, the most modern and smallest of them, founded in the 1960s and full of elegant villas with gardens interspersed with tree-lined avenues. The village overlooks a almost completely free beach that slopes on one side towards the rocks that lead to Donnalucata and on the other towards the Irminio Reserve, a unique naturalistic oasis.

For those who love unspoiled nature, it will be a pleasant experience to walk among cliffs, sandy coasts, small woods of Mediterranean scrub that frame the mouth of the river.

Together with a rich fauna, this place is a sanctuary not to be missed, for those who love to spend their days in the middle of nature, without depriving themselves of a refreshing bath at the end of the path that leads to the blue Mediterranean Sea.

Not far from Playa Grande, there is the largest seaside village of Scicli: Donnalucata. Its name betrays the ancient origin: it is indicated in fact by the Arab geographer Idrisi, in the twelfth century, with the name of nayn al-awqāt, the source of the hours, due to a source of fresh water that still flows directly from the beach and which once did it at regular intervals, precisely on the occasion of the five different hours of the day that matched those of Muslim prayer.

The latin phonetic transcription gave today’s name to a lively village with the amazing beaches of Ponente and Micenci and the promenade full of elegant bourgeois villas of the late nineteenth today became the Marinella of Il Commissario Montalbano.

Then the pier area with the small fishing port and the fish market held every day is suggestive.

There are also historical monuments such as Palazzo Mormino and the church and the Convento delle Milizie, built in the place where in 1091 the battle between Normans and Saracens took place, resolved in favor of the first by the intervention of the Virgin, descended from heaven in favor of Christians directly on the saddle of her white horse.

Inside the church there is a footprint imprinted in the stone.
Micenci beach is only the beginning of a long uninterrupted coastline that can be walked on foot next to the sea, gradually named after the names of the different districts: Pezza Filippa, Palo Rosso, Spinasanta, Arizza (now
become a hamlet) and Bruca, the last one before arriving at the hamlet of Cava d’Aliga, which developed in the sixties from a small gulf which preserves, between two high walls of rocks a splendid beach.

A few kilometers to the east, we arrive at the most charming coastal village: Sampieri. A nineteenth-century village, its historic core develops around the tiny pier and the docking of fishermen whith its boats from which
you can buy fresh fish every morning.

The church of the Madonna delle Grazie and the convent of the discalced carmelite nuns differ from the small fishermen’s houses that stand on the cobbled streets.

In the most modern part of the country, there is a wonderful beach of almost two kilometers where the “Caretta Caretta turtles” lay their eggs, with dunes, even ten meters high, a pine forest, small marshes and a karst pond, important places of stop for migratory birds en route to and from Africa.

Further away there is the amazing bulk of the Fornace Penna, a red brick factory abandoned after a fire in 1924 and which has become one of the examples of industrial archeology in the whole Mediterranean as well as being the famous Mannara of Il Commissario Montalbano. The sea of Sampieri was the inspiration for the great painter Piero Guccione, able to capture the infinite shades of color in his works.

On the west side of Sampieri there is another beach called Costa di Carro; from a small crescent-shaped beach, in fact, a nature reserve with a sparkling environment made of expanses of dwarf palm trees endemic of the area (in fact the reserve is dedicated to them), agaves, capers, reeds that degrade to the path that runs along the high rocky cliffs which are a rarity of the coast and from which the bravest also dare to dive.

There are many caves, including that of the Colombi. Continuing along the cliffs, you arrive at Punta Corvo, where the famous Spaccazza is located, a crack that allows you to get to a splendid shoreline of rocks with a sea
with its spectacular colors.

The extra-urban park of Costa di Carro and Punta Corvo, with the suggestive ruins of a lighthouse of the financiers – numerous times set by Il Commissario Montalbano – are ideal places for a naturalistic walk.

Almost twenty kilometers of free coast that will help you regain the much desired psycho-physical balance, after the months that we have left behind.

Cookies help us deliver our services. By using our services, you agree to our use of cookies. More Information